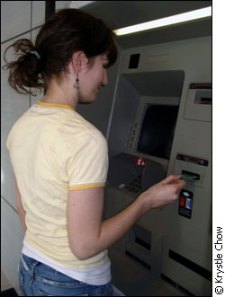 Anne Cottingham prepares for another trip.

OTTAWA – Summer is nearing, and Anne Cottingham is planning a trip to Europe after graduation.

One thing she says she’s never considered when preparing for travel, however, is what transaction costs may be incurred with each different kind of payment method.

“I just think, ‘OK, I’m going,’” she says when asked if she’s thought about whether it’s best to use a credit card, debit card, traveller’s cheques, or to buy foreign currency. “It’s not something I’ve really looked into.”

Cottingham has just returned from Vancouver and was in New York City in late February. She says she plans to indulge her newly discovered passion for travel even more once she has finished her fourth year at Carleton University.

It’s an expensive hobby, to be sure; Cottingham says she spends about $500 to $1000 for a short-term trip like her New York weekend jaunt, excluding the cost of travel and lodging.

She adds she brought $200 USD in cash for her New York trip, mainly for cabs, meals and some stores. For the most part, she used her credit card and didn’t use her debit card much at all.

BANG FOR YOUR BUCK

Pros: Will always be accepted, convenient

Cons: Lots of transaction costs; not as widely accepted as cash or credit cards

With Canadians spending an average of $2,467 for just a 10-day summer vacation, according to a 2005 Scotiabank survey, it’s probably a good idea to find out which payment methods give travellers the best bang for their buck so they’re not spending a big chunk of their money on hidden transaction costs.

Melanie Minos, manager of media relations for the Canadian Bankers Association, says travellers need to talk to their financial institutions before going on a trip to find out about any fees or transaction costs they may incur, especially when using debit cards.

“It’s not all the same fees for different banks,” she says, adding that some Canadian banks may have arrangements with certain financial institutions abroad so you can withdraw money from automated banking machines (ABMs) abroad without fear of extra transaction costs.

Minos says choosing a method of payment depends on a number of factors.

“It’s a balance between convenience, safety, and paying fees with debit and traveller’s cheques,” she says.

Jonathan Carroll, president of travel website itravel2000.com, advises travellers to do their homework when planning what kind of payment methods to use abroad.

He uses the example of his own debit card being rejected at a Target outlet in the United States, despite being issued by a well-known international bank, the Hong Kong and Shanghai Banking Corporation or HSBC,a bank with more than 9,500 offices in 76 countries.

Cottingham agrees that using debit cards can be a problem, and describes a similar incident when she was in Los Angeles.

“I was on Melrose Avenue and this pushy saleslady was trying to get me to buy a belt, but I didn’t have enough cash,” she recalls with a laugh. “Then the machine didn’t accept my debit card, and she got really mad!”

Cottingham says she is wary of using traveller’s cheques because she doesn’t know how they work.

While traveller’s cheques were once the travel currency of choice, they are losing popularity among today’s travellers.

A 2005 Scotiabank survey shows that traveller’s cheques are the least popular form of payment method, at six per cent, trailing behind debit cards (33 per cent), cash (39 per cent), and the most popular payment method – credit cards, named by 58 per cent of travellers surveyed.

Service charges to buy traveller’s cheques probably don’t help the situation as most banks in Canada charge about one to 1.25 per cent of the amount purchased, with a $3 minimum.

Traveller’s cheques are also not as widely accepted as credit cards or cash, especially in more remote locations, says Minos. 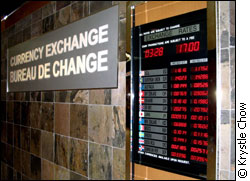 Even using cash can prove problematic. In addition to the usual worries with safety and the fact that cash can’t be replaced or insured, travellers should also watch out for the cost of exchanging one currency for another.

“It all depends on the market,” says Paul Brennan who supervises the Ottawa branch of Calforex Foreign Currency Services. “The more traded a currency is, the lower the costs are.”

Brennan explains that there is no fixed percentage of transaction fees for trading any one currency, but those charges are more likely to be high if the currency is not commonly traded because of the costs to the currency exchange centres.

CHECK BEFORE YOU LEAVE

Travellers also should calculate what is lost or gained by reconverting their foreign currency into Canadian dollars, adds Carroll.

Carroll and Minos both advise travellers to take a small amount of local currency or U.S. dollars – Carroll recommends about $300-$400 USD – and to use credit cards where possible, although it’s important to do research on whether they will be accepted at a destination.

Debit cards may be useful for certain locations such as Europe, Minos says, since the Cirrus and Plus ABM networks are fairly good.

But the bottom line is to do your homework on your travel destination and practice safety where cash is involved, says Carroll.

“Look at your destination and see if credit cards are widely accepted,” he says. “Make sure you take a small amount of cash and take advantage of safety deposit boxes in hotels.”
—

– Check for travel benefits that your credit card may offer you

– Split up your cash and keep some in a hotel safe

– Have smaller denominations on hand for tips and taxis

– Use foreign coins before going home; most currency exchanges don’t accept them

– Ensure destination has cheque-cashing offices or accepts cheques as is