By KRYSTLE CHOW
Published in the Ottawa Business Journal newspaper and website.
Nov. 5, 2007 (Nov. 7 on OttawaBusinessJournal.com) 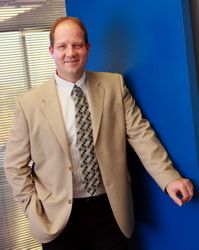 Ken Kirkpatrick is bullish on his company’s future as a supplier of electronic navigation systems. Analysts tend to be in accord, though they warn there are some hurdles to overcome.
Photo by DARREN BROWN for the Ottawa Business Journal

With its situational awareness products already in use by navies around the world, analysts say OSI Geospatial Inc. is clearly the market leader in its space.

Chief executive Ken Kirkpatrick says OSI’s main product, the proprietary Electronic Chart Precise Integrated Navigation System (ECPINS), already has 60 per cent of a $100-million market, which is growing at 10 per cent annually. And that’s with 80 per cent of the world’s navies yet to convert from paper-based to electronic charting.

“Five years ago, we identified the warship navigation sector as the sector to go after and become market leader in, and we controlled the intellectual property to support our leadership position … we’ve been very successful in the naval navigation market and are the hands-down leader in that space,” says Mr. Kirkpatrick.

“A lot of what we do is in emerging markets, we’re changing how people do their job since the majority of warships navigate from paper charts and (are only beginning to) move to very sophisticated electronic systems. The good news is that the rest of the world has accepted the technology and the benefits it presents, so it’s a matter of when, not if.”

The company’s ECPINS product is an all-in-one navigation system which integrates various sensors on the bridge of a ship, including the global positioning system (GPS), radar and depth sensors, and provides the information in a single picture to allow ship commanders to know where the craft is and what its surroundings are like.

Mr. Kirkpatrick says this technology is in use by eight navies worldwide and has been standardized by the Canadian and U.K. navies. Many of the company’s military customers even require other major technology vendors – some of whom are OSI’s competitors – to integrate OSI’s product into their offerings.

“In Canada right now there is the Joint Support Ship program which requires some very large sophisticated companies to integrate our technology into their solution. We are now being pursued by (companies such as) Lockheed Martin and L-3 Communications to work with them to support their bid,” he says. “So we’re a winner no matter what, no matter who wins, because whoever wins will integrate our technology into their electronic system … it’s created a very significant sales channel.”

However, OSI is still busy courting new customers in other military market sectors, and it’s hoping to move into land and air navigation. The company is also working with existing clients to constantly improve their infrastructure. These two factors prompted the company’s home base relocation earlier this year to Ottawa from British Columbia.

OSI’s recent expansion into the critical infrastructure protection (CIP) and security assessment market further necessitated the move, since it would be closer to both the U.S. Homeland Security department – a major customer – and to its new Layered Security Solutions office in Norfolk, Va.

Robert Catellier, an analyst with Clarus Securities, says the move seems prudent with the recent trends in the military markets since 9-11.

“There’s still a lot of spending going on in this part of the market, especially with the U.S. experience in the Middle East. They’re taking situational awareness to another level (as) there’s been a lot of military lessons learned in Iraq and Afghanistan,” he says. “Since Sept. 11, the military has changed from using larger units to smaller, more deployable units, and there’s a need for better co-ordination and interoperability (between naval crafts) and for situational awareness.”

Mr. Catellier says the company is already in a strong position since it has no direct competitors for its situational awareness technology, but the move east will help OSI get an even firmer grip on the market.

The decision also places the company in a good spot to take advantage of growth in the CIP market, which was $17 billion in 2006 in the United States alone and which Mr. Catellier says could grow to an estimated $33 billion in about five years. OSI’s recruitment of former top U.S. Navy SEAL Cmdr. James Liddy to lead its new business unit will also help its cause, he adds.

“(This market) could provide up to $10 million (in revenues) a year to start with,” says Haywood Securities analyst Dev Bhangui, who notes that the assessments could lead to even more revenues if OSI also convinces customers to implement its situational awareness technology to prevent attacks. “They can get close to $1 million for each assessment, so $8 million to $10 million is not hard.”

However, although OSI faces few challenges, the issues that do exist present fairly major problems for the company, both Mr. Bhangui and Mr. Catellier say.

“The cycle for the company is very long; it takes a long time to win the order and then to fit and deliver the systems takes another four or five quarters, but investors in Canada are all going ‘What am I getting 15 days down the road?’ I say you’re not getting anything, buddy, just a coffee,” says Mr. Bhangui, explaining why investors might not be jumping on OSI’s market potential.

Mr. Catellier says the fact that OSI is addressing a smaller part of a larger system in partnership with other vendors is also problematic.

“The larger part is subject to external influences such as budget problems, so a good part of revenue is difficult to control on a timing basis,” he explains.

Mr. Bhangui says another significant problem is OSI’s capital structure due to the company’s arrangements with private equity firms, which has led to a very low stock price and an equity overhang.

“In the last couple of quarters OSI has performed below expectations because of its backlog … It’s a vicious circle, it needs to show significant growth for a couple of quarters in order for its stock to smash through that equity overhang, then you will see investors who are looking to be in there for the long term, not just guys looking for the stock to reach a certain point so they can get out,” he says.

Still, Mr. Kirkpatrick says the company is confident of its ability to pass that acid test, as indicated by the more than doubling of revenues to $26 million this year from just $11 million in 2005.

“With the politics in U.S. surrounding Afghanistan and Iraq in full swing, we’re seeing the Democrats waving their hands up. (The expectation is) they will take the government and move the troops back, and they’ll be politically very concerned to make sure the threat is going to be mitigated and will be spending a lot of money to protect the U.S. borders from terrorist attacks,” he says. “We see OSI being very well-positioned in the middle of that in the next couple of years.”