By KRYSTLE CHOW
Published in the Ottawa Business Journal newspaper and website.
Sept. 5, 2011 (Sept. 7 on OBJ.ca) 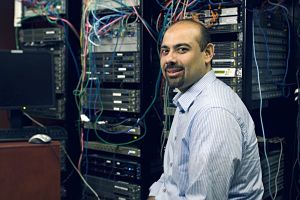 The entertainment industry is going over-the-top – and that’s not necessarily a reference to how there’s too much violence in the movies.

Rather, it’s a term used to describe a new breed of content providers that are making a dent in the business of traditional cable companies, telecommunications providers and bricks-and-mortar video stores, and creating opportunities for Ottawa firms in the process.

Over-the-top, or OTT, refers to services that ride over existing networks, without having any affiliation with those network operators. In the video space, it’s a niche that’s being shaped by U.S.-based Netflix, which began streaming movies and older television programming in Canada last year.

And it’s just one aspect of a changing entertainment delivery landscape, as service providers rush to find new ways to compete for eyeballs for their content.

That suits Jaison Dolvane, and his Ottawa-headquartered company Espial, just fine. The firm, which provides software and services to support on-demand television, in 2010 recorded its first positive operating earnings since going public in 2007, a development it attributed to the “Netflix factor.”

Espial also saw revenues rise 22 per cent in its second quarter, and it now counts more than a dozen large, tier-one operators and 80 to 100 other providers among its customers worldwide.

“Netflix … educated the consumer as to what is possible in terms of streaming video, that you can get pretty decent video quality even though it’s over the Internet,” says Mr. Dolvane.

It’s something Espial has been asserting for years, although things have certainly changed since the firm’s early days when it thought the phone companies would be leading the way in offering Internet protocol-based television, to compete with the cable providers.

“Now anybody and everybody is offering (video-on-demand) and requiring IPTV gear,” Mr. Dolvane says, adding Espial has even garnered business from consumer product manufacturers such as Hitachi and Iomega that want to be IPTV-ready.

“It’s creating a hypercompetitive market, and that’s good for the vendor community servicing these companies.”

The younger generation’s comfort with watching content on everything from their PCs and tablets to DVD players to gaming consoles provides an even greater avenue for streaming video, he adds.

Still, there are many nuances to the evolution of the entertainment industry that are allowing technology firms to fill the gaps between the future of streaming video and more traditional content sources.

Ottawa-based Zip.ca started in 2003 with a mail-based DVD rental service much like Netflix’s in the United States, and it soon hopes to launch a streaming service as well. But in the meanwhile, says chairman Rob Hall, there’s plenty of room for yet another new model – DVD rental kiosks.

“People still want real DVDs, especially with the advent of Blu-ray and bigger screens on TVs; they want the quality of the actual DVD or Blu-ray,” says Mr. Hall, noting that the kiosks provide more convenience and cheaper prices than a brick-and-mortar video store.

And the balance between the quality of physical DVDs and the convenience of OTT services is one that can swing either way in today’s households, says Jonathan Hurd, a director at strategy consulting firm Altman Vilandrie & Co.

Mr. Hurd cites a survey conducted by his firm that revealed while younger consumers were more likely to engage in “cord-shaving” practices such as downgrading from a premium cable subscription and supplementing with an OTT service, they were also more apt to be bothered by lower-quality, non-high-definition content than older folks.

One thing is clear, however; the whole experience of finding and deciding what to watch, as well as where and when to watch it, is in the process of changing dramatically.

“It comes down to more players looking to do similar things and larger markets (for us),” adds Mr. Dolvane.